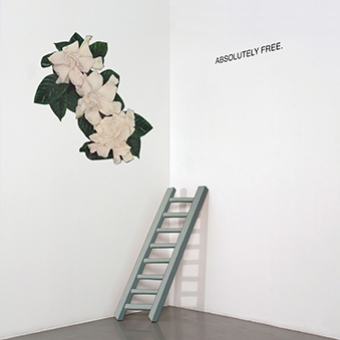 Absolutely Free sets out to create hypnotic soundscapes that integrate analog electronics, woven polyrhythms, sun-blinding psychedelia, with essences of Bollywood, Krautrock, and the patient craft of pop music at the core. The Toronto trio's debut full-length explores the tip of its eclectic influences, anchored by its unified narrative, smoothed structures, and technical understated-ness. Nothing is absolute. Nothing is free.

Having released a series of well received singles, UFO/Glass Tassel (2012) and On The Beach/Clothed Woman, Sitting (2013), Absolutely Free entered the studio with producer Mike Haliechuk (Fucked Up, Austra) and set out for an ambitious debut, melding elements of their favourite rock & contemporary records spanning the last several decades. While their singles served as brief introductions to their sound spectrum, Absolutely Free. is a proper introduction and perfect example of their ability to hone a diverse spectrum while maintaining a unified narrative. The result displays fragments of Phil Spector, Kraftwerk, Terry Riley, Gang of Four & modern neo-psychedelia.

They are currently working on a feature length film score, commissioned remixes, and the third installment in their singles series.

The song [U.F.O] reaches optimal zone-out potential before introducing its winsome, wandering melody. That sense of idyll, however is dramatically upended by an urgent chorus whose heart-racing tribal percussion infects the song for its duration, leading to a mercilessly cacophonous conclusion. - Pitchfork Media (UFO Track Review) *Best New Track

"On the Beach", may showcase their ever-evolving facility for grandiose, percussive psychedelic pop, but the flip, "Clothed Woman, Sitting" is even more audacious. It's like an entire day condensed into 12 inches: pulsating analog-synth tones summon the first rays of the morning while an emergent motorik bedtrack mimics the daydream-inducing locomotive hum of a subway commute downtown, before a calamitous, machine-gunned climax rudely thrusts us into the concrete-encased chaos of the urban jungle. - Pitchfork Media (Clothed Woman, Sitting Track Review)

As Absolutely Free they still make complex, time signature-shifting music, but this was less manic, less skronky with decidedly groovier rhythms. (For me, that's a definitely an "Oh Yeah.") I don't think we've got a full picture of what these guys are capable of. - Brooklyn Vegan

Neo-psychedelia and techno-based krautrock have definitely made friends on this cut from these Torontonians. Sounds like Wayne Coyne sitting down at the computer with Kraftwerk, and then they all do their thing. - Alan Cross

Watch out for the next time these guys play a show, because they are an absolute revelation live. - Exclaim!