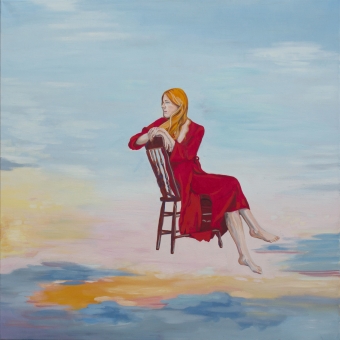 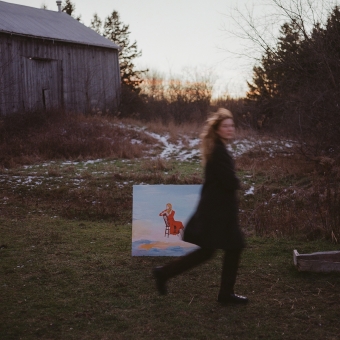 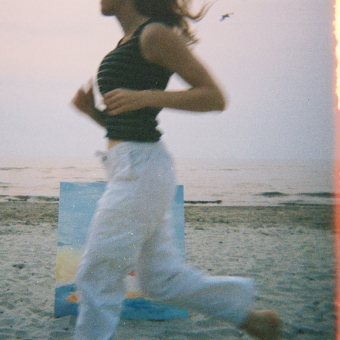 A flash of telepathic closeness shared between friends, the euphoric memory of a summer’s day so perfect you want to live inside it forever, the dusty heat of a Texas afternoon, a tingle of melancholy on a solo walk home after a party: these are some of the ineffable moments captured in expressive detail by Georgia Harmer on her debut album Stay In Touch (April 15, Arts & Crafts). With a wisdom and poise that belies her youthful age, Harmer has penned an emotionally resonant collection of songs that articulate the ways in which even the most fleeting experiences can forge bonds between strangers, create families out of friends, and one by one form the joys and sorrows that make up a life.

Though Stay in Touch is her first album, Harmer has been making music practically since birth. She hails from an artistic family, including her aunt and labelmate Sarah Harmer (Georgia’s parents, both professional musicians, met while playing in Sarah’s band). “I grew up having access to any and every instrument that I wanted. My dad would give me these little guitars that he would tune to an open chord so I could just strum and sing along,” she recalls. Harmer started recording her own songs at 10 and, while still a teenager, hit the road as a backing vocalist for Alessia Cara, touring and playing every late night TV program for eight months. But when it came time to make her own album, Harmer knew she needed to find her own people.

While the intimacy of her music evokes a solo folk artist strumming an acoustic guitar onstage, Harmer is a band person, playing in four different bands throughout elementary school (she’s 22 so this is recent history!). After dropping out of university to pursue music full-time, Harmer began jamming with jazz students at Humber College in Toronto; it was there she met the musicians who would help her shape Stay in Touch. The final piece of the puzzle fell into place the night Jasper Smith, who engineered and co-produced Stay in Touch, caught Harmer performing and offered to help her make a record.

Harmer and her new band of jazz school misfits—guitarist Dylan Burchell, drummer Julian Psihogios, and bassist David Maclean—assembled to record at ArtHaus in Dufferin Grove, a lively, tree-lined Toronto neighborhood full of young families. “It’s essentially a garage converted into a recording studio, and it’s meant for overdubs and writing sessions, but we somehow managed to fit an entire band’s live recording setup in there,” says Harmer. “It was nice because we could just play how we’re used to playing, crammed in a room together, and capture the natural feeling of that.” Smith didn’t tell Harmer that he had never engineered a record before until after it was complete.

Despite their stripped-down recording process, there is nothing lo-fi about Stay in Touch. It spans everything from intimate folk and strummy country to sophisticated jazz and pop-kissed rock. Harmer and her band created musical landscapes that live up to the lyrical richness of the songs. “The band completely understood the world the songs needed to exist in,” says Harmer. The record sparkles with the lightning in a bottle feel of a band in thrall to their musical chemistry, adding more depth to the record’s themes. Stay in Touch is inspired both by the relationships of Harmer’s past and the joy of finding your people in the here and now.

For Harmer, music has always been a way “to process what was going on under the surface of a moment, a way for me to understand in retrospect what something meant.” The tone is set with album opener “Talamanca,” a song that begins with a story about a trip to Mexico and expands to encompass the communion that can occur between close friends—”Speaking without words/ Languages of seeing and being seen.” The arrangement is built around Harmer’s evocative voice and bass harmonics contributed by Ben Whiteley (The Weather Station, Julia Jacklin) with reverb giving the song a dream-like texture to reflect Harmer lyrically moving through her memories.

A similar theme is explored on “Headrush,” a sunny pop song that captures the bittersweet sensation of being so happy you’re almost sad, a yearning to capture a moment in time like a beam of light refracting on a suncatcher. The dusty, grungy “Austin” recalls a day on tour with Cara in Texas, when a homesick Harmer felt particularly connected to her father and his own experiences as a touring musician. Harmer’s father plays lead guitar on the track; they recorded his contribution in the family dining room.

Harmer calls herself a sentimental person, and Stay in Touch is full of romanticism—a rare quality in an irony-soaked culture. The closest Harmer gets to irony is on “All In My Mind,” a song that looks back on a relationship where she was made to feel crazy. Transforming a “hard experience” into the record’s breeziest rock song “is sort of like a little bit mocking, which to me is empowering,” says Harmer. “To be like, I'm rocking out! You’re able to sort of laugh at something, and to think, ‘Well that was dumb of you.’”

Intelligence, vulnerability, sincerity, play—these are what  make Stay in Touch an unforgettable statement from a new artist with a heartbreakingly simple message: when you stay in touch with the experiences that have shaped you, you stay in touch with yourself. For Harmer, this is a record about “staying in touch with the aspects of yourself, your life, the world, that keep you aware of what's most important. Whether that's people, relationships, deep feelings, the value of togetherness and support. It’s about finding the balance between holding on and letting go, between the beauty of the world and the pain in the world.”