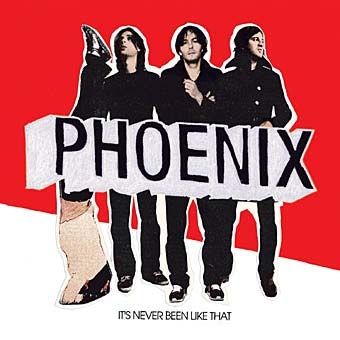 It's Never Been Like that is the third studio recording from Phoenix -- four boys from the outskirts of Paris who possess a distinctly french approach to indie pop music.

Formed in 1999, Phoenix became an underground hit with the loungy, mellow and unpretentious sound heard on their 2000 debut album United. With their 2004 album Alphabetical, Pheonix further developed their distinctive sound of syncopatic, electronic takes on light acoustic melodies.

View Archived Tour Dates
While it's true that you have to wait for inspiration to strike, there's comfort in knowing it will inevitably arise, even if you have to look all over the globe for it before you find it-or so goes the logic behind the epic recording process of Phoenix's new studio album. To write their new album, titled Wolfgang Amadeus Phoenix and released this May on Glassnote Records and Loyaute (the band's own imprint), the Gallic quartet decamped to various locales away from their home studio in Versailles, searching for the stimulus necessary to transform the new material into a coherent LP. "We spent a long time waiting for the chemical reaction," says guitarist Laurent Brancowitz, "that moment when a song isn't just the sum of all of our parts, but it's something more. And the idea was to go someplace we'd never been." Actually, they went to a few: Brancowitz and his bandmates Thomas Mars (vocals), Christian Mazzalai (guitar), and Deck D'Arcy (bass) worked in the Parisian studio of 19th-century Romantic painter Theodore Gericault ("The light was beautiful," Brancowitz says), chartered a houseboat on the Seine ("Not the best idea-some of us got seasick"), and stayed at the Bowery Hotel in New York City for a month, among others. As the guitarist explains with self-effacing humor, "It was like our Orson Welles moment."

As you'd expect, the traveling took its toll, leaving only a trip back from whence they came as a means of allowing the songs to gel, this time in the Montmartre home of Philippe Zdar, the producer known for his work as half of French house duo Cassius. Zdar, a longtime friend, lent Phoenix his studio and wound up producing the record alongside the band-the first time Phoenix has recruited outside help. "He's very European, very dramatic," says Mars. "We worked in his studio for a year and a half, so he was around the songs. He had a lot of good comments that helped shape them. There was no in between with him; either the songs were great or we'd ruined them. Every day was either time to open a bottle of Champagne or to go home depressed."

The results collected on Wolfgang demonstrate a kind of deliberate, considered approach, and in turn, they've created what is the best album in their already-amazing catalogue. Featuring the band's signature melding of synthetics and organics, of sharp, danceable rhythms and intense guitars, of effortless melody with a considerable dose of aural panache, the album's ten songs are more layered than previous efforts. "On our last album, we were trying to make a minimalist record-something austere, almost ascetic," Brancowitz explains. "This time we wanted to create something more elaborate." That's evident on electro-tinged slow jams like "Fences," the sweeping and mostly instrumental "Love Like a Sunset," and the spirited pop of lead-off track "Lisztomania," on which Mars sings the transcendent chorus, "Like a riot, like a riot, oh!/ I'm not easily offended/ It's not hard to let it go/ From a mess to the masses." On first listen, his lyrics might seem obscure, but Mars definitely intends to reference the Hungarian composer: "Franz Liszt was the rock star of his day," he explains. "Other musicians hated him for getting all the girls; his concerts were out of control. This song's about playing live, the romantic beauty of a crazy crowd...and about the loneliness of still being one in a group of many."

That self-reflexive quality informs Wolfgang, as does Phoenix's sensibility-a nostalgic, vaguely melancholic vision of the way things ought to have been. "It's a little bit of a fantasy," Mars says. "We wanted to create an optimistic vision of the future for ourselves." His references are clear: The title of "1901," for instance, refers to year after the Exposition Universelle in Paris, which Mars describes as the city's "most futuristic moment" (and which, incidentally, popularized Art Nouveau). The same can be said of the album's title-a blending of the classic and the upstart. "It's both unacceptable and unforgettable," says Brancowitz. "In a way, it redefines what you can and can't do. My mother is German, and she hates the title. I'm taking that as a sign that we're doing something right."

The four men of Phoenix are a close-knit group of childhood friends from Versailles, which Mars calls "one of the most beautiful cities in France, but a place without a soundtrack. People don't listen to music there." Nevertheless, the foursome have deep roots in the modern French music scene: Brancowitz, for instance, who is Mazzalai's older brother, played in a band called Darlin' with Guy Manuel de Homem-Christo and Thomas Bangalter, later to become Daft Punk. Phoenix, meanwhile, was formally founded after they performed backing Air for a few shows in the UK. Mars also sang the vocal on Air's "Playground Love" which appeared on the soundtrack to The Virgin Suicides (the film introduced him to his girlfriend, Sofia Coppola). The band then released their debut, United, whose song "Too Young" became an underground hit when Coppola used it in Lost in Translation; they followed up with Alphabetical in 2004, a critically acclaimed record whose labored creation took almost two years and produced precise, measured material like "Everything Is Everything" (so endearing them to then-Dior Homme menswear designer Hedi Slimane that he commissioned the band to provide music for one of his runway shows); and followed that up with 2006's It's Never Been Like That, a much rawer collection of rock 'n' roll gems.

Though they're obviously fond of the studio, they say that playing shows is what's sustained them most over the years. As Brancowitz says, "What I love most about playing live is the feeling that you can fail," he says. "It's always a gamble as to how well it's going to come across. But what makes it good is that you have to fight for it. Our friendship is what keeps us together. We're a gang, and when we're all working together, it can be beautiful."