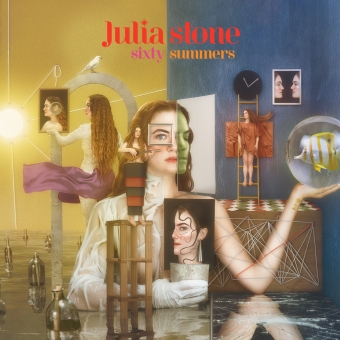 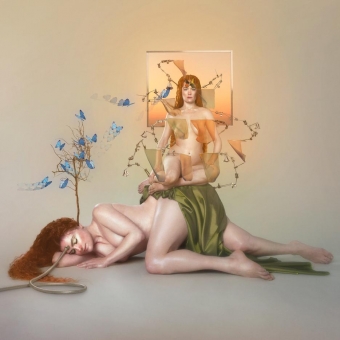 Julia Stone marks her eagerly anticipated solo return with a striking new single "Break". In a profound and exciting shift from her folk origins, Stone has shed a proverbial skin to emerge in an entirely new form. With its surreal, metallic synths and horns, the single is reminiscent of David Byrne, and is the perfect introduction to Stone's compelling new era.

"Break" was produced by none other than St. Vincent (aka Annie Clark, who also plays on the song) and Thomas Bartlett (Yoko Ono, Sufjan Stevens) with contributions from Stella Mozgawa (Warpaint) and Bryce Dessner (The National). Annie Clark reminisces on her first introduction to "Break" - "I was so floored by 'Break'. The feel, the vibe, it's catchy but weird - like ‘You Can Call Me Al’ through the looking glass."

Her first solo output in eight years, "Break" finds the celebrated songwriter diving headfirst into the cosmopolitan, hedonistic world of late-night, moonlit pop. The single presents a collision of Stone's singular artistic output with the most inspiring corners of New York avant-garde.

Stone muses that "Break" is about being alive with the head rush of new love: "It's when you first meet somebody, and you have that connection, and your chemicals go crazy. It's about enjoying that first moment, without considering what comes next." Stone's words resonate in the breathtaking visual that accompanies "Break".

Accompanied with a striking visual, the video for "Break" sees Stone and a collective of stunning dancers, choreographed by prolific Andrew Winghart (Billy Eilish, Solange, Lorde) moving in beautiful and striking formations through the streets of Mexico City - under neon signs, nightclub ceilings, streetlights and an abandoned Opera House.

Directed by LA-based Australian director Jessie Hill (credited on clips for Angus & Julia Stone, Halsey, Broods and Jarryd James) the visual adaptation of "Break" was shot in November 2019 with a club scene echoing a dystopian future (one in which we eerily now find ourselves) where the air is toxic and the dancers are styled in handmade, bejewelled face masks. Hill and Mexico City wardrobe designer Paolo Alfaro collaborated to conceptualize and create custom-made costumes, with fabrics sourced from local suppliers and handmade, hand-painted shoes.

Surrealist Spanish-Croatian artist Filip Custic created the artwork for the single. His work explores the impact of digital technologies on our conscience and sense of identity, bringing together art, technology, and humankind. He created a world where Julia exists as a Siren calling her lover from the other side.

Since the release of her 2012 debut solo album, By The Horns, Stone has placed her creative energies into various artistic endeavors. She and brother Angus Stone released two of their four albums - 2014's self-titled, Platinum-selling, ARIA # 1-debuting Angus & Julia Stone and 2017's Gold-accredited Snow featuring their hit "Chateau" which took out #3 on the triple j Hottest 100 of 2018. Stone also curated Songs For Australia in March this year - a compilation album to aid relief following the devastating Australian bushfires - featuring Kurt Vile, Laura Mvula, The National, Paul Kelly and Stone herself. She also stars in the upcoming film adaptation of Tim Winton's Dirt Music.

"Break" is the first single to be released from a larger body of work; the details of which are to be revealed. Reimagined, reborn and reinvigorated, this new era for Stone replaces dirt under foot with wet pavements and sticky dancefloors; trades blue skies for red lights and red lips. Step into Julia Stone's brand-new world.