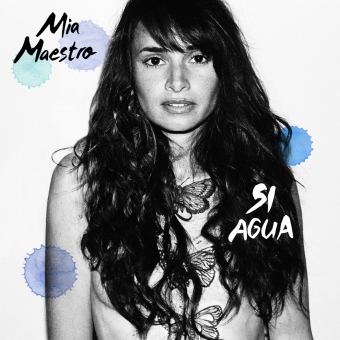 Mia Maestro is set to release her highly-anticipated debut album 'Si Agua' on April 14, as a joint venture with Canadian indie label Arts & Crafts and Nacional Records. A world-renowned actress, singer and songwriter-Maestro has created a wide array of complex and memorable characters on-screen throughout her versatile career, while also carving out her own unique place in the indie music world.ï¿½

With a formidable acting career, with roles in films such as The Motorcycle Diaries, which received a Golden Globeï¿½ nomination, the critically acclaimed biopic Frida and Tango which both received Golden Globeï¿½ and Academy Awardï¿½ nominations, and hit singles such as "Llovera" as featured on the soundtrack of The Twilight Saga: Breaking Dawn, in which the actress also starred, Maestro is taking the music world by storm with the release of her first full album 'Si Agua'.

Maestro has always felt a passion for music in addition to acting, saying: "I feel lucky to have the opportunity to share my music with everyone, writing songs is very personalï¿½ I'm more vulnerable when I'm sharing music. However, acting is also something that I have a great passion for and I look forward to both careers developing Maestro made the decision to record 'Si Agua' in Iceland after visiting the country for the first time when she was invited by acclaimed Icelandic singer-songwriter Emiliana Torrini to open for her shows. Maestro spoke with Feist for Interview Magazine about 'Si Agua', which translates to "if water," saying, "A lot of songs on the album have to do with my experiences in the water, or melodies that I've come up with when I'm on a boat or in the middle of nowhere or taking some quiet time on my own."

An eclectic assortment of talented solo musicians and composers were brought together for the recordings, each adding their personal aesthetic touch to each song. The list includes Damien Rice, experimental artist Ben Frost, bass saxophonist Colin Stetson, pianist Thomas Bartlett, Shahzad Ismaily and Bjï¿½rk / CocoRosie producer Valgeir Sigurï¿½sson. Also adding an orchestral layer to the album is composer Nico Muhly (Jï¿½nsi, Antony and the Johnsons), who wrote the string and brass arrangements. Maestro's Argentinian upbringing consistently echoes throughout the album with a unique blend of Latin, American and European culture that pays homage to Maestroï¿½s musical inspirations.ï¿½

Currently, Maestro can be seen starring in the hit FX television series The Strain. Created and directed by Oscarï¿½ nominee Guillermo del Toro, the high concept thriller was FX's most-watched premiere ever and was just renewed.