The Most Serene Republic

The Most Serene Republic 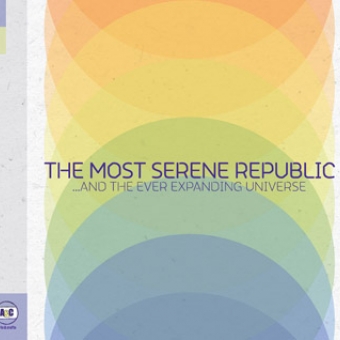 ...And The Ever Expanding Universe

Buy ...And The Ever Expanding Universe

Stream ...And The Ever Expanding Universe

Out of the serenity of Milton, Ontario returns their most ambitious export, the young sextet known as The Most Serene Republic. Their third full-length, ...And The Ever Expanding Universe is due for release July 14 on Arts & Crafts. Produced by Dave Newfeld (Broken Social Scene, Super Furry Animals, Los Campesinos!), ...And The Ever Expanding Universe shows The Most Serene Republic confidently striding forward with a more mature, diverse and exhilarating sound.

With two acclaimed albums and an EP already under their belts, these just now 24-year old musicians have already been performing together for a half-dozen years. Very much a product of their wide ranging personalities, the band is led by Ryan Lenssen's classical piano and obsession with musical history, never mind his obsessive attention to detail, and singer/lyricist Adrian Jewettï¿½s Joycian stream-of-conscious lyrics and larger then life stage personality. The entire band's excellence with their instruments is undeniable and is proven both live and on album. 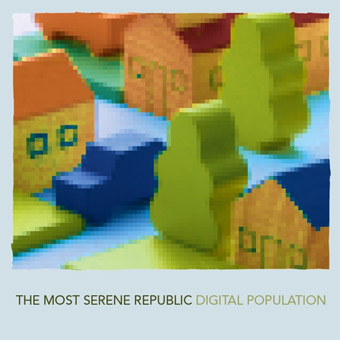 Live At XMU was recorded during a trip to XM headquarters in Washington DC last December. Tobi and the XMU crew were gracious enough to have the band in for an acoustic session, and we loved it so much we decided to make it available to everyone. Live At XMU features 4 TMSR favorites done acoustically including 3 tracks from last years "Population" album as well as "Anhoi Polloi" from the Phages EP. 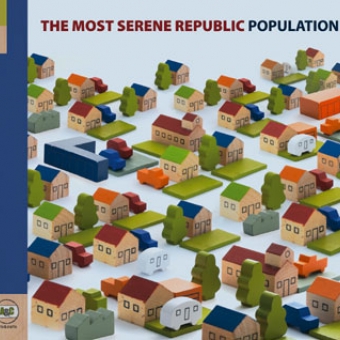 The album was self-produced by the band in Toronto over the last year, and was inspired by the sprawling suburbs of their hometown of Milton, Ontario. Musically, they sound as grandiose as ever. On Population, they showcase their prog and jazz influence, while building on the unique sound they carved out with their Arts & Crafts debut, Underwater Cinematographer. 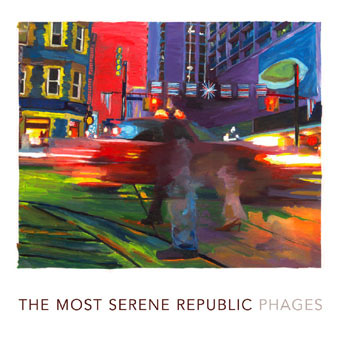 Phages is a limited edition tour ep from The Most Serene Republic. If you've seen them live then you're sure to know most of these left-field, ubersonic, time-signature challenging compositions. If you haven't then Phages will give you a glimpse into the world they currently inhabit. 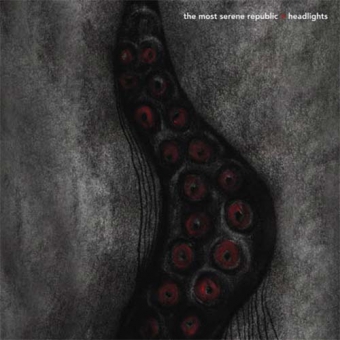 The Most Serene Republic + Headlights

Buy The Most Serene Republic + Headlights

Stream The Most Serene Republic + Headlights

A split 7" released by Polyvinyl Records, it features an as yet unreleased song from Most Serene on one side, and a new song from Polyvinyl record artist Headlights called Put Us Back Together Right on the other. 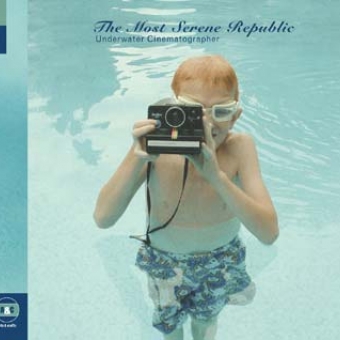 The pride of Milton, ON, this sextet is the newest signing to Arts & Crafts and the first from outside the Broken Social Scene circle of friends - not that it has taken long for them to become dear to our hearts. Their debut, Underwater Cinematographer, is a joyous and unpredictable yarn as can only be spun by the young. Hang on and sing along - you'll find you already know the words...

A decade can sound like a lot of things.

It can sound like a shuddering civilization dragged forward at an ever-increasing pace, of cell phones and social media, of new and improved haircuts and blue jeans, of reality TV and financial collapses.

It can sound like becoming and being content with becoming things, great grown-up things -  More educated! Poly-professionals! Creators of little people! Condo-owners! Navally-inclined!

Yet still, that same unreasonable, incalculable and beautiful universe The Most Serene Republic opened the door to over a decade ago with 2005's Underwater Cinematographer remains - a phosphorescent glow to soundtrack the velocity of the wide-eyed, the lost, the found and the confused.

For six friends - Ryan Lenssen, Adrian Jewett, Nick Greaves, Sean Woolven, Simon Lukasewich and Adam Balsam - this list of impossible things includes but isn't limited to: drowning the ears of North America, the United Kingdom and Europe with sonic wonderment through three full-length albums - the aforementioned Underwater Cinematographer (2005), the oh-so-dreamy Population (2007) and, of course, the kaleidoscopic ...And the Ever Expanding Universe (2009) -  and the kid-brother Phages EP (2006), all on Arts & Crafts, plus the elbow-greasing Fantasick Impossibliss EP (2010) and the glimpse into how The Most Serene cosmos was birthed - Pre Serene: Thee Oneironauts (2011). All this while commencing on a near-constant touring schedule and making time to blow kisses to stage mates like The Strokes, Metric, Broken Social Scene and Stars.

It has been a half-decade since The Most Serene Republic has released new material. While merely a blip in terms of the universe, it can seem like a lifetime between when an elongated adolescence through the vehicle of artistry is left behind and adulthood is finally embraced. And so it is, that these six best of friends returned to making music through a very different lens, yet somehow managed to still capture all the impossibly beautiful things and the essence of what made their universe so special.

The ten songs on Mediac, recorded by the band over four years throughout Toronto, produced by TMSR's Ryan Lenssen and mixed by sonic architect David Newfeld (Broken Social Scene/Super Furry Animals/Los Campesinos!) will arrive in our Milky Way galaxy on November 13th via MapleMusic Recordings. And yes, yes... the good stuff is all there.

Themes include: Warm feelies! Bad things! Anxiety! Ontario! Prescriptions! Capitalism! The incessant and unbelievable weight of living, surrounded by your friends and sweeping melodies, plucked banjo strings, hiccupping violins, drums played by humans, drums spoken by machines but played by humans, bookshelves of guitar lines and bass-lines and keyboards (and god knows what else) punctuated by friendly vocals from friendly faces.

It's been a bit of a wait, sure, but The Most Serene Republic's universe didn't collapse, the door to said universe stayed wide open - inviting you, the person with ears, in.