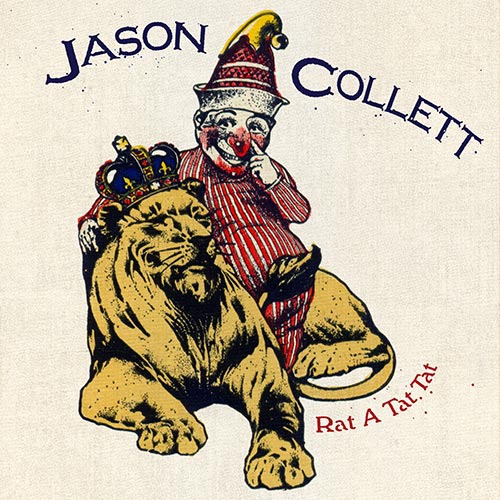 
We are excited to announce details for the new album from Toronto-based Jason Collett titled Rat A Tat Tat, set for official release on March 9, 2010 in North America.

Mixed by Robbie Lackritz (Feist, Jamie Lidell), Rat A Tat Tat was recorded and produced in Toronto by the duo of Carlin Nicholson and Michael Oâ€™Brien. The pair comprise one half of Collett's label mates, Zeus, whose members have performed as Collettâ€™s backing band since the 2005 release of his acclaimed Idols of Exile album.
Rat A Tat Tat is the follow up to his widely praised 2008 release, Hereâ€™s To Being Here and is an achievement on many levels. The album attributes to, and trumpets the energy of an exciting and burgeoning Toronto creative arts scene of which Collett, highly regarded as a prolific songwriter and performer, finds himself at the very centre. Rat A Tat Tat shows Collett using the Canadian backdrop to further explore his roots as a national storyteller (â€œLake Superiorâ€, â€œWinnipeg Windsâ€, â€œHigh Summerâ€), and his knack for articulating the subtleties of human interactions and experiences (â€œCold Blue Haloâ€, â€œThe Slowest Danceâ€). As well, he dives headfirst into the passions and struggles of relationships (â€œRave On Sad Songsâ€, â€œLove Is A Chainâ€). Rat A Tat Tat is a remarkable and honest example of a storyteller documenting and soundtracking his experiences and surroundings with distinct and precise ability.