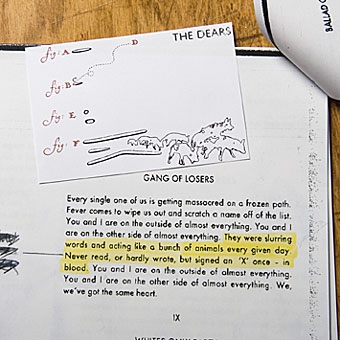 You And I Are A Gang Of Losers EP

Buy You And I Are A Gang Of Losers EP

Stream You And I Are A Gang Of Losers EP 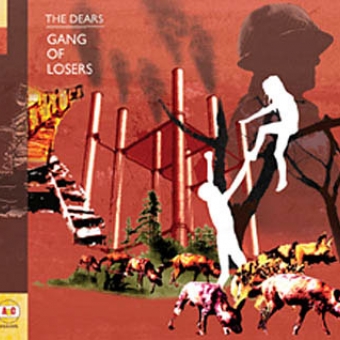 In the late nineties, The Dears were an unconfirmed rumour of ardour; full of possibility; propelled by passion, alienation, and alcohol. By 2001, they ceased to be a rumour; they were real and dark. The NME named The Dears as ï¿½Probably the Best New Band in the World.ï¿½ Gang of Losers is at once a classic Dears album and a bold step forward. It moves from grinding guitar solos to ethereal vocals, pre-occupied with the themes of ostracization, social class and indie rock cool. The album features the seductive fusion of frontman Murray Lightburnï¿½s onstage vocal range and studio precision. We need these songs: if only to counter the worldï¿½s indifference, and soothe the inner loser that thrives on all our worst fears. 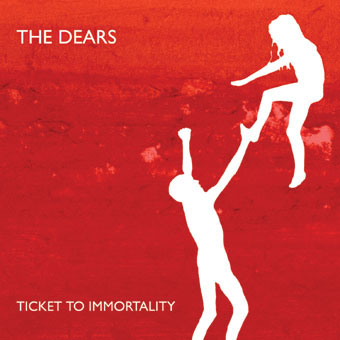 View Archived Tour Dates
Born in 1995, The Dears is the lifework of Murray A. Lightburn. Son of a jazzman-turned-preacher, Lightburn's attunement to songwriting was shaped equally by nineties rock and a broad tableau of gospel, soul, and pop music. Early incarnations of The Dears brought bassist Roberto Arquilla into the fold, followed by Natalia Yanchak on vocals and keys. In the summer of 1998, the band holed up in a house in Westmount, Quebec: a makeshift studio built of borrowed gear and a rented tape machine. With their $1,000 recording budget they could only get one reel of tape, and had to track strings in Yanchak's sweltering apartment. Against all odds, debut LP End of a Hollywood Bedtime Story emerged in 2000 to national acclaim and cultish admiration.

The Dears' second album, 2003's No Cities Left, swept the group from Montreal notoriety to international rapture. The NME hailed The Dears as "Probably the best new band in the world." As The Dears tackled the globe and attracted hysterical adulation, Rob Benvie surrendered the guitarist position to Patrick Krief, whose impassioned fretwork saw The Dears through its most frenzied period. The band toured incessantly for months behind No Cities Left, then jumped right into recording its follow-up, 2006's Gang of Losers.

Internal instability and the dynamics of a relentless workload led to the band's fracture, and once the touring behind Gang of Losers came to a conclusion, The Dears almost called it quits. Instead, Lightburn and Yanchak headed into the studio, knowing only there was work to be done. They recruited past bandmates Arquilla, Krief, and Benvie - all of whom had moved on to other projects - with uncertain expectations. The record that emerged would become 2008's Missiles. Though this group of musicians wasn't ready to tour behind that album, it was evident something special was in the works.

After filling in on bass for a tour in 2009, Benvie said to Lightburn: "Whatever you're doing this Fall, I'm in," before leaving for India for months. The final hometown show on this same tour, Lightburn recalls a special appearance from Krief: "...reprising his role from "Lights Off" I gave him my guitar and left the stage while he stood in the center, blazing his way through that solo." The writing was on the wall: The Dears would come back, from an almost death. The fruits of a decades-long history: ambitious recordings, innumerable sweaty shows, a million miles survived, and a thousand hearts shattered. Throughout, Murray Lightburn, Natalia Yanchak, Roberto Arquilla, Robert Benvie, and Patrick Krief have been bound by friendship, purpose, trust, and gallons of booze and tears. Anchored by drummer Jeff Luciani, The Dears began working in a newfound spirit of collaboration. Between the group, MP3 demos began circulating via email. MB upon MB of tracks were zipped, uploaded, downloaded, transformed, uploaded and downloaded again. Spontaneous, late-night meetings would yield the best work of their lives: music inspired by death, fearlessness, rage and promise. For The Dears, this was a new way of doing things and hundreds of ideas were considered for the album.

After months of rehearsals, thirteen standout songs emerged. Rather than rush into the studio, the band headed to their beloved Mexico City for a three-night residency to debut new material to some of their most impassioned supporters.

Upon the band's return, the gear was shipped straight from Montreal's Trudeau airport to the studio. The next day, The Dears began making what some are already calling "rock history." Sixteen days later, a hard drive filled with 150 GBs of recorded material was swaddled in bubble wrap and shipped across the continent to producer Tony Hoffer in Los Angeles. As the band continued to record and upload additional tracks, Tony began mixing down what would be christened Degeneration Street. The final mixes were mastered by "Big Bass" Brian Gardner. The result: 589 MBs of glory.

Degeneration Street, the fifth album from The Dears, delivers the passion and soul that has earned the band the adoration of fans and critics worldwide. From the electrifying nihilist pop anthem "Thrones," to the star-scraping heights of "Galactic Tides;" from the grimy opener "Omega Dog," to the Motown sci-fi of "Lamentation," Degeneration Street is, definitively, The Dears.